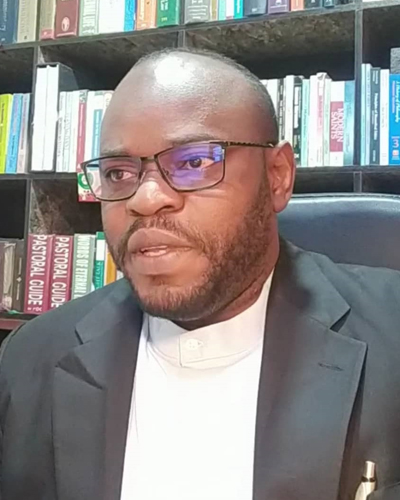 One of the scientific pivots and cornerstones on which the thinking of civilized man is based is the idea that reality evolves. A cursory glance at the historical evolution of the Intellectual life of Prof. Ikechukwu Anthony, Kanu, O.S.A, reveals a swaggering gait that has transmuted the retinues of life’s fundamental forces into an edifice that would stand the test of time.

IKECHUKWU ANTHONY, KANU is a Friar of the Order of Saint Augustine, Province of Nigeria: an eminent ecclesiastic and an accomplished scholar. He is a Professor of Religion and Cultural Studies, Tansian University and a Visiting Professor to the University of Jos, Department of Religion and Philosophy and Saint Albert the Great Major Seminary, Ogun State. Prior to Tansian, he served as Dean of Students at the International Bio-Research Institute, Enugu.  He also taught Philosophy and Religion at Saint Augustine’s Major Seminary, Jos and the Augustinian Institute, Makurdi- and until last month, he was the Rector of Villanova Polytechnic, Osogbo, Osun State, Nigeria. He is currently a member of the Governing Council of Veritas University, Abuja; a member of the Governing Board of the International Bio-Research Institute (IBI) and the African Institute for Consecrated Life and Allied Studies (AICLAS). He is also a member of the Board of Trustees of the Association of African Traditional Religion and Philosophy Scholars (AATREPS), African Congress on Philosophy and Religion (ACPR), Scientific Board of Arts, Literature and Social Sciences (SBALSS), Alternative Perspectives and Global Concern, Canada (APGC).

He is a polymath and Gulliver of a sort, with commendable expertise within the parameters of academics. Professor Kanu is the Global President of the World Cultural Studies Research Association (WCRA) and the founder of the Association for the Promotion of African Studies (APAS). His other academic initiatives include Igwebuike: An African Journal of Arts and Humanities (IAAJAH), International Journal of African Studies and Sustainable Development (IJASSD); Igwebuikepedia: Internet Encyclopedia of African Philosophy (IIEAP); Villanova Journal of Social Sciences, Arts and Humanities (VJAH); Villanova Journal of Science, Technology and Management (VJSTM). He has to his credit more than 220 academic papers published in National and International Journals; he has written and edited about 70 books and presented more than 250 papers at National and International conferences. He has also contributed more than 50 chapters to books, not counting his contributions in the areas of synopsis, encyclopedia entries and reviews of books.

Little wonder then that he is the most rated scholar internationally by Google Scholar- the International Indexing platform, in the areas of African Metaphysics, African Bioethics, African Traditional Religion and African Cultural Studies. In the area of African Philosophy, Professor Kanu Anthony is only surpassed by Thaddeus Metz, the South African Distinguished Professor of the University of Johannesburg. Based on international rating, Professor Kanu has remained a reference point in the academic world. If there is anyone who is in search of a clergy who is also a scholar tell him to search no further for we have found one in Professor Ikechukwu Anthony, Kanu OSA. He is the pride of Tansian University as his works have made the name of citadel of learning to echo at various international academic tables.

Prof. Kanu is an Editorial Consultant to more than 20 National and International academic Journals, and a member of the editorial board of not less than 50 national and international academic Journals. The Distinguished Professor has received several awards, and notable among them are: Honorary Doctorate Degree in Education by Commonwealth University, London; Honorary Doctorate Degree in Public Administration by the London Bridge Business School, London; Honorary Doctorate Degree in Metaphysics by The University of America, Curacao, Netherland Antilles; He was awarded the 2018 Patron of the Arts, by the Faculty of Arts, Nnamdi Azikiwe University, Awka; 2018 Distinguished Academic of the Year, by the Society for Research and Academic Excellence (SRAE), University of Nigeria, Nsukka (UNN); Oracle of Wisdom Award, by the Department of Philosophy and Religious Studies, Tansian University in 2018; 2017 Africanwatch Orator Gold Merit Award by the Africanwatch Network; 2013- Best Paper Award, by the Centre for Promoting Ideas, USA; Three Books of Readings were written in his honor and published in the United Kingdom in 2019. They include: Igwebuike Philosophy; Perspectives on Igwebuike Philosophy; Igwebuike Ontology. The Eudoxia Research Centre, India, honored Professor Kanu with the Golden Academician of the Year 2020; He was also awarded the International Louis Althusser Golden Award of the Year 2020. He is also the recipient of the 2020- Kwameh Nkrumah Transformational Leadership Medal (TLM) presented by the African Institute for Public Administration (AIPA), Accra, Ghana.

Professor Kanu is a member of several academic bodies including: American Academy of Religion (AAR), USA; The American Philosophical Association (APA), USA; Alternative Perspectives and Global Concerns (APGC), Canada; Igbo Studies Association (I.S.A), USA; International Society for Development and Sustainability (ISDS), Japan; Universal Researchers (UR), UAE and Global Illuminators, UAE; Global Association of Humanities and Social Science Research (GAHSSR), India; Commonwealth Academy of Science, Education and Arts, London; The National Coalition of Independent Scholars, USA. He is a Fellow of Global Labour Organization, USA; a fellow of the Commonwealth Academy of Education, Science and Arts, London; a fellow of the Institute of Policy Management Development (IPMD); a fellow of the Society for Research and Academic Excellence (SRAE), UNN; a fellow of the Institute of Management Consultants (FIMC), London; a fellow of Eudoxia Research Centre (FMERC), India; and a fellow of the Africa Institute of Public Administration, Ghana. Kanu was born on 20th November 1981, and hails from Arondizuogu in Imo State of Nigeria, an ancestral homeland and a centre of ancient civilization.